I have been to different parts of the Americas and you can pretty much expect to see a cross either hanging on someone’s necklace, standing up on a high hill or somewhere visible on a church or hillside. Either way, it seems crosses are common and can be found in many places. What seems true is that it is seen closely connected with Christianity. Sometimes you see different forms of crosses. Some are beautifully crafted for jewelry. Others are rough and hand carved out of rustic wood.

So, what is the cross? Where did it come from? Who came up with the cross? Does it mean anything? Is it ok to wear a cross?

A brief study of the cross in secular history shows us the origins of the cross are difficult to pinpoint. Some say as early as the Babylonians others say that the Egyptians and although they did have cross-like figures,

they probably did not have the same meaning of the Roman form of capital punishment by way of hanging probably  on a form of a two timber structure in the form of a “T”.

Roman crucifixion was practiced hundreds of years before the crucifixion of Jesus among two thieves. It was a public, humiliating and excruciatingly slow death, usually by suffocation caused by physical fatigue.

Punishment by way of hanging on a tree was something that was established in the nation of Israel.

his corpse shall not hang all night on the tree, but you shall surely bury him on the same day (for he who is hanged is accursed of God), so that you do not defile your land which the LORD your God gives you as an inheritance. Deuteronomy 21:23

Galatians later comments on this saying,

Christ redeemed us from the curse of the Law, having become a curse for us– for it is written, “CURSED IS EVERYONE WHO HANGS ON A TREE “– Galatians 3:13

You see, the cross of Jesus the Christ was the altar that God set up to pay for the sins of the world.

We have an altar [the cross] from which those who serve the tabernacle have no right to eat. Hebrews 13:10

It will be preached until He comes…!!! 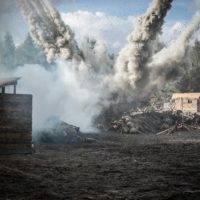