That if you confess with your mouth the Lord Jesus and believe in your heart that God has raised Him from the dead, you will be saved. For with the heart one believes unto righteousness, and with the mouth confession is made unto salvation.

Can a person be saved without a public demonstration, such as walking down an aisle, raising their hand, standing, kneeling at an altar, or signing a commitment card? Romans 10:9–10 is often used to indicate that a “public profession” is essential to salvation. Having a clear understanding of these verses is vital.

As in all serious Bible study there are three things we always want to do:

If we are serious about knowing what the Bible teaches, we dare not be in a hurry. Rushing to a conclusion without the careful and prayerful study of the Scriptures nearly always proves to be disastrous. Folks tend to resort to hurry-up methods when preparing for a Bible class or in “working up” a sermon. Whenever we approach the Bible in that way, we are trivializing it, and will one day give an account before God for such a slipshod treatment of His holy Word. Now let’s discuss Romans 10:9-10.

That if you confess with your mouth the Lord Jesus and believe in your heart that God has raised Him from the dead, you will be saved.

The word “and” in this verse is a translation of the Greek word kai. Depending on the context and the author’s purpose, kai may be variously translated. It has more than one use and more than one meaning in the New Testament.

Kai is usually translated “and” when it is used as a simple connective word. For instance:

And when they had come into the house, they saw the young Child, with Mary his mother, and fell down and worshipped Him. And when they had opened their treasures, they presented gifts to Him: gold, frankincense, and myrrh.

All four occurrences of kai in this verse are used to connect each thought. This is the common way we use “and” in English.

Kai is also used to indicate contrast. We see it used this way in John 16:13:

However, when He, the Spirit of Truth, has come, He will guide you into all truth; for He will not speak of His own authority, but [kai] whatever He hears He will speak; and will tell you things to come.

A third use is seen when the intention of a passage is to emphasize something. This emphatic use is clear in 2 Corinthians 11:1:

Oh, that you would bear with me in a little folly — and indeed [kai] you do bear with me.

Finally, it is important to note that kai is used at times when the Holy Spirit wants to give some additional explanation to what has just been said. When used in this way kai is generally translated “even”, as in 1 Corinthians 2:10: “For the Spirit searches all things, even [kai] the deep things of God.” In this instance “all things” particularly includes “the deep things of God.”

Now, how does all of this apply to our verse? Simply this: I believe kai in Romans 10:9 should be translated “even” — so that it would read: “That if you confess with your mouth the Lord Jesus, even believe in your heart that God has raised Him from the dead, you will be saved.” Applying this usage, “confess with your mouth” is further explained to mean “even believe in your heart.”

What has brought me to this conclusion? Two things primarily (other than the actual contents of the verse): context and the testimony of all other Scripture on the same subject of salvation. I’ll illustrate.

The emphasis in Romans 10 is twofold: righteousness by faith in contrast to righteousness by works (especially the works of the Law), and the recognition of Jesus as Lord, that is, His deity.

Brethren, my heart’s desire and prayer to God for Israel is that they may be saved. For I bear them witness that they have a zeal for God, but not according to knowledge. For they being ignorant of God’s righteousness, and seeking to establish their own righteousness, have not submitted to the righteousness of God. For Christ is the end of the law for righteousness to everyone who believes.

The Lordship (deity) of Christ

That if you confess with your mouth the Lord Jesus [literally, Jesus as Lord]… For there is no distinction between Jew and Greek, for the same Lord over all is rich to all who call upon Him. For whoever calls upon the name of the Lord shall be saved.

These were the very two things the Jews refused to do: yield to a by-faith righteousness provided by God through Messiah Jesus (see Romans 9:30–33), and recognize the full deity of the Lord Jesus Christ.

Also, in the context it is essential to notice that in Romans 10:9 Paul places confession with the mouth before believing in the heart which follows the order stated in verse 8.

The word is near you, even in your mouth and in your heart (that is, the word of faith which we preach).

But in verses 10 and following Paul gives the order of actual experience, and we see that believing comes before confession. This is verified in verses 13–15:

How shall they preach unless they are sent? Which comes first, the preaching or the sending? The sending.

How shall they hear without a preacher? Which comes first, the hearing or the preaching? The preaching; otherwise, there is nothing to hear.

And how shall they believe in Him of whom they have not heard? Which comes first, the believing or the hearing? The hearing comes first, as stated in verse 17. Without the hearing there is nothing to believe.

How shall they call on him in whom they have not believed? Which comes first, the calling or the believing? The believing. The mouth confesses what the heart has already believed. So, the call of verse 13 is a call to the Lord (not necessarily to people) springing from a heart that already believes.

Considering the Testimony of All Scripture

To be justified we must have God’s righteousness credited to our account:

But to him who does not work but believes on Him who justifies the ungodly, his faith is accounted for righteousness.

In the first five chapters of Romans, God carefully explains that salvation is by faith in Christ, plus nothing else. This agrees with 160 New Testament verses. After giving the most detailed explanation of salvation by faith found in the Bible, Paul would not then teach there is something more that must be done for one to be saved; namely, verbal confession.

There is also the further testimony of those who were genuinely saved but who did not publicly declare their faith. They were, at least for a time, secret believers.

Nicodemus is described as he who “came to Jesus by night” in all references to him in the Scriptures (John 3:1–2, 7:50, 19:39). He did not demonstrate that he had already believed in Christ until after Christ’s crucifixion when he brought spices for Jesus’ burial.

Joseph of Arimathea, “being a disciple of Jesus, but secretly, for fear of the Jews” (John 19:38). We must accept this testimony of God’s Word as being valid.

Nevertheless even among the rulers many believed in Him, but because of the Pharisees they did not confess Him, lest they should be put out of the synagogue.

Some declare these were not genuine believers, but who shall we believe, men or God? The verse says they “believed in Him.”

So confession of Christ, though expected by God and normal for the believer, is not a condition for receiving eternal life, nor is it really the subject of Romans 10:9–10. – Written by Richard Seymour @ Clarityministries.org 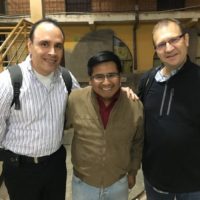